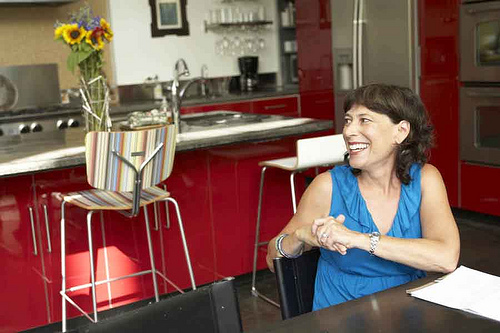 Original article is available at this link.

How do you make a difference in today’s crazy, confused world? Let’s consider the case of Joanna Brody (MA Communication Management ’91).

Joanna and her husband, architectural writer and music critic Thomas Small, spent three years building a sustainable house on a quiet, shady cul-de-sac in Culver City, CA. Media coast to coast have reported on their house: The New York Times ran a feature story and online slide show in its Home & Garden section last year, the Los Angeles Times has twice reported on the house, and Los Angeles TV station ABC-7 included the house in a story about recycled wastewater.

Neighbors watched with raised eyebrows as the house was constructed. “We stand out in a very traditional neighborhood,” Joanna says, and she’s right. The house is imposing, inside and out. Two and a half stories tall and 3,800 square-feet in size, it definitely makes a statement in a street of small bungalows.

Custom concrete walls enclose five tall glass doors set in a row, adding drama to the exterior. Most of the prefabricated steel that envelops the house is recycled. Inside, stalks of dried rice grass are laminated in tempered glass panels that line a ramp leading upstairs, bringing a touch of country into the very urban interior. The grasses vie for attention with exposed ceiling insulation made from remnants of denim fabric and sunflower husks that form wall panels and book shelves.

The city/country theme is carried outdoors, Joanna notes. “Our grey water system includes a cistern that captures, filters and stores the wastewater we produce. The water runs through a series of underground tubes, like radiant heating, and irrigates our yard without sprinklers or any excess runoff.” The house is also cooled by cross-ventilation and heated by passive solar energy.

It’s very important to Joanna and her husband to leave as small a carbon footprint as possible on the earth. “Five people live in this house,” she says. (They have two children, Joey and Lyra, and a tenant who lives in an apartment over their carport.) “And we have two dogs,” she adds, nodding toward a pair of handsomely enormous French Briard dogs, Hobbes and Kali.

“Culver City has everything we need within walking distance.” Joanna says, “Grocery stores, banks and restaurants, plus there’s a kids park nearby and all three of us (tenant included) work from home. We rarely use our car [a high-mileage Prius]. And we’re only two blocks from the light rail system scheduled to open next year.”

When Joanna and her husband started to build the house, the only other member of their family was Hobbes. During the next three years they adopted Joey; six months later Joanna gave birth to Lyra; and the family acquired their second French Briard, Kali.

“Thomas and I wanted to pursue the American Dream of moving from a condo to a house,” Joanna says, “and we knew we wanted to move to Culver City. We were torn about taking down the old house we bought, which was a 1947 tract home in very poor condition. But it really was unsalvageable. It was full of asbestos, full of mold.

“So we approached our architect friend, Whitney Sander, and asked if he could design the greenest house he’d ever built.”

“And make it affordable,” Thomas adds. “And he did.”

The prefabricated steel frame for the house went up in only three weeks. “It was like an erector set,” Joanna says. The concrete walls took longer. Known as “green sandwich” walls, they’re usually built in mass quantities. But the manufacturers had never built wall panels this high and narrow before. The walls — wire mesh and rebar wrapped around Styrofoam and sprayed with concrete — help buttress the building’s upper floors.

Inside the house, it was time to install the insulation. “The contractor, Sean Icaza, and his crew kept going to Home Depot for samples of wire mesh to secure the denim fabric to the ceiling,” Joanna recalls. “We had to figure everything out as we went along.”

The floor plan for the house was built with Hobbes — and future children — in mind. “We knew that as Hobbes got older he’d have trouble with stairs; that’s why we installed the ramp. We decided to laminate rice grass into the glass panels so you could see through them when you were upstairs, while hiding nose prints from the dogs and fingerprints from the kids.”

The contractor out-sourced the grass panels to a sustainable business in Culver City. “Sean had never built green before, by the way,” Joanna says. “He agreed to take on this project for very little profit because he was intrigued by the innovative approach to prefab materials, and the house’s green credentials.

“Now he’s the green contractor in town,” Joanna says happily. “And Whitney has become known as a green architect. Our house has helped to change quite a few people’s lives.”

So where did Joanna’s drive to differ and make a difference begin?

“I was raised by socially-minded parents who are deeply committed to giving back to society,” she says. “It only felt right when I was doing good for the world.

“My career in public relations evolved organically. My family supports many organizations, largely in the area of healthcare. I’m not particularly good one-on-one, so I didn’t want a career in nursing or therapy. I was good with communications and realized that I could have a bigger job and touch more people by doing social marketing and promoting social causes.

“From the beginning, I knew I wanted to work with clients I really respected, and I wanted to be based in LA. I liked what the Annenberg School’s graduate program had to offer. Of course, the school’s reputation goes without saying, so that was a big bonus. And I liked the evening courses designed for working professionals.”

Joanna’s passion for innovative projects began during her final year at USC Annenberg. “One of the things I remember most is a project I did with Susan Evans, who was the school’s director of academic development, and Peter Clarke, the dean. They’d met a retired produce merchant who had recently launched a program to recover unsold and still-nutritious fruits and vegetables and distribute these to community organizations serving low income people who couldn’t afford these costly foods.”

Susan and Peter immediately recognized this program’s potential to improve the lives of hungry and malnourished people. “They started a project, From the Wholesaler to the Hungry,” says Joanna, “to spread the idea of recovering ‘edible but not sellable’ produce elsewhere in the country, where this innovation was unknown.

“They sent me to Houston to visit a pilot program similar to the effort in Los Angeles, which at the time were the only locations channeling wholesale amounts of fresh produce to the poor. I observed everything, took loads of notes, and when I got back to Annenberg I drafted a training manual that ended up being used by food banks in cities across the U.S.”

Eventually, From the Wholesaler to the Hungry sponsored the launch of more than 150 produce recovery programs.

“When I look back, I realize that this was a very early form of sustainability,” Joanna notes. “It was one of my most treasured experiences.”

So has Joanna’s degree made a difference? “Annenberg has definitely given me an edge in the market,” she says. “To say that you’re an Annenberg grad opens a lot of doors, and people are always impressed. I’ve found that new and prospective clients take me more seriously, and I can choose which ones I want to work with.”

One of her first jobs was launching the world-renowned Inn & Links at Spanish Bay resort and golf course in Pebble Beach, CA, where she dealt with habitat conservation and coastal issues.

Her next job was with a PR agency where Joanna had interned as an Annenberg graduate student. “The City of Los Angeles was setting up a new curbside recycling program; it was the largest in the world at that time,” she recalls. “My tiny, boutique agency came out of nowhere to compete with Edelman and other big names in the business, and we landed the $1 million contract. It was the first big, big, project I worked on, and I learned a lot about the possibilities for recycling.”

Joanna was now ready to start her own PR agency, Brody Public Relations. One of her early clients was the environmental nonprofit organization TreePeople. “That’s where I learned about cisterns and water storage,” she says. Joanna organized a public launch event and earned a feature article in the Los Angeles Times about a 250,000-gallon cistern that TreePeople constructed to collect rainwater for irrigation and firefighting. Once completed, the cistern was covered with dirt and became a garden for an education and conference area.

“What I really love about having my own business is the constant variety of work I get to do,” she says, “both in terms of building my business and working for different clients. Being innovative is the most important part of my work. If I’m not excited and I don’t believe in my client, I’m not going to do a good job. I’m constantly searching for new ways to tell my clients’ stories. I never get bored.”

Public Relations is a great career, she notes. “With the economic slowdown, companies are investing in more cost-effective PR rather than advertising. And there are so many more opportunities and arenas for using social media. I would definitely recommend PR and social marketing as a career. I think it’s a great place to be these days.”

For everything, there is a season

Joanna is one of the lucky ones who are able to integrate their professional and family lives and their passion. “:My time is so precious right now,” she says, “that I really don’t want to spend time on something that is not professionally fulfilling — and hopefully lucrative at the same time, which is not always the case in the arena I’m working in. So I do exactly the work that I want to do.”

And she devotes exactly the amount of time she wants to for her family. She, Thomas, Joey and Lyra step outside the house into their garden. Lyra asks for the swing and Thomas gently pushes her while Joey runs to play with his toy recycling truck. Hobbes and Kali frolic and cavort across the cistern-fed lawn. Joanna watches with quiet contentment. It’s a perfect Southern California day for a PR professional who takes pride in her stewardship of our environment.