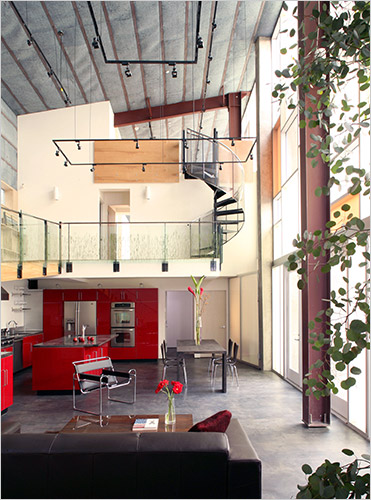 THOMAS SMALL is an accomplished cook, so it’s important for him to try new and exotic ingredients every now and then. When it came to the construction of his eco-friendly house, that’s exactly what his architects gave him. After all, crushed sunflower husks and shredded blue jeans don’t sound like typical building blocks.

But in the world of green design, such ingredients are not rare. So now, Mr. Small and his wife, Joanna Brody, along with their two very young children and a pair of large French Briard dogs, share a prefabricated urban building that has become an example for others looking for creative ways to go green.

The project began with a challenge from one friend to another. “We want the greenest house you’ve ever designed, but we have almost no money,” Mr. Small recalled telling Whitney Sander, who, with his wife, Catherine Holliss, runs Sander Architects, of Venice, Calif. Another goal was that it be a quiet retreat and acoustically resonant to accommodate a passion of his, chamber music recitals.

Inspired by the house that Charles and Ray Eames created in 1949 from a prefabricated steel frame and doors, windows and the like ordered from a catalog, the architects took the project on the condition that they could pursue a novel strategy. Besides using acrylic, Panelite, recycled steel and Styrofoam, they would try unusual ingredients like sunflower husks for wall panels and bookshelves, and blue jeans (for insulation).

It was an unorthodox vision for a site containing little more than a decrepit bungalow. Hoping to start a family and eager for abundant space and natural light, Ms. Brody, 44, and Mr. Small, 49, bought it a few years ago, exchanging a three-story Santa Monica town house for a bargain on a leafy cul-de-sac in this former blue-collar neighborhood.

Because they have ties to the arts (she works at home as a public relations consultant to arts and environmental groups; he was a movie writer and producer and is now a marketing consultant to architects and also a music critic), they considered the location and its new art galleries and restaurants ideal.

The bungalow wasn’t worth saving, so in its place the architects gave them a prefabricated structure with a customized steel frame and panels. The materials, which cost $22,000, arrived on a flatbed truck and were erected in three weeks, for $18,000. The contractor, Sean Icaza, embraced the chance to master a new way of building, but the biggest cost was time: with a tight budget, planning and construction stretched out for three years. The final cost, including trim, plumbing and so on, was $528,000, only about a third of the going rate for architect-designed houses of this size in the Los Angeles area.

The 4,200-square-foot house, which is low-maintenance and has a small carbon footprint, rises to the 30 feet allowed by zoning. It runs along the site’s north side and, through five glass doors set side by side, opens southward to a long, thin yard. There is a duplex rental apartment over the carport in front, and bamboo and bougainvillea have been planted at the edge of the plot for screening.

The house fulfills the owners’ ambition to create a work of art that is intensely green: it relies on cross-ventilation for cooling and passive solar energy for heating, and recycled water irrigates the garden. Three sides of the house are clad in folded steel panels the color of a good burgundy. The fourth side, the south wall, is a geometric assembly of concrete, acrylic and glass, inspired, Mr. Sander said, by a Georges Braque Cubist piece, “Aria of Bach.”

To create rigid buttresses that support the upper floors, wire mesh and rebar were wrapped around Styrofoam and sprayed with concrete. For insulation and sound absorption, the ceiling and walls were lined with two layers of shredded jeans, part of them exposed. Held by wire mesh, they complement the screw-on panels of fiberboard, made of crushed sunflower husks and rising to 16 feet in the living area.

An open kitchen provides Mr. Small with a command post for entertaining. The entire living area is lighted from suspended bars and frames of halogen spots that are dimmed for energy conservation and will be replaced by L.E.D.’s, which are expected to become less costly.

The north wall is lined with built-in bookshelves accessed from a shallow ramp. Made of broad bamboo stair treads, the ramp serves as a gallery for concerts on the concrete floor below. Lining it is a railing of rice grass laminated within sheets of tempered glass.

The ramp leads to the second-floor master bedroom, where clear windows near the ceiling offer a prime view of the light shows outside. ‘‘I love waking up to unshaded light and watching the passage of the moon,” Ms. Brody said. “On July Fourth, we watched four fireworks displays from our bed.”